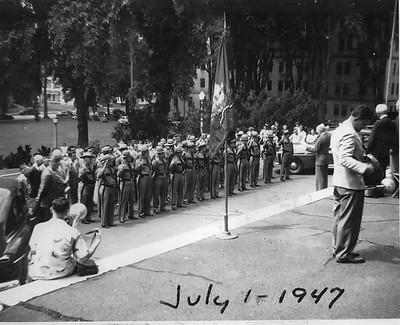 The Vermont State Police on Friday, July 1, marks the 75th anniversary of the agency’s creation, a watershed moment that arose from tragedy and laid the groundwork for a proud legacy of dedicated service across generations.

State leaders established the Vermont State Police on July 1, 1947, in the aftermath of the disappearance of Paula Jean Welden, an 18-year-old Bennington College student who vanished the year before. When local officials were unsuccessful in pursuing the case, they called in state police investigators from Connecticut and New York — because Vermont had no similar agency. The case, which remains unsolved, rallied Vermonters and their political leadership to finally launch the Vermont State Police after many years of hesitation and debate.

“Three quarters of a century removed from those formative days, the Vermont State Police stands as a leader in public safety and law enforcement, working every day to serve all the people of the Green Mountain State: residents and visitors, survivors of crime, family members, stranded motorists, lost hikers — all who reach out for our assistance,” the director of the state police, Col. Matthew T. Birmingham, wrote in a letter to the agency’s current sworn and civilian members.

“Our organization and our people stand on the shoulders of those who served before us and built the Vermont State Police into the premier organization it is today,” Birmingham continued. “During the past 75 years, VSP has expanded and evolved into one of the country’s most professional, progressive, and well-respected police agencies.”

In 1947, Vermont turned to former U.S. Marine Corps Maj. Gen. Merritt Edson as the first commissioner of the newly formed Department of Public Safety, the parent agency of the Vermont State Police. His military background led him to fashion a rank structure and model the state police’s uniforms after those of the Marines. On Day 1, the state police employed 55 troopers and seven civilians. 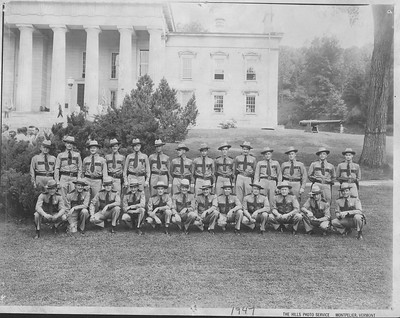 Today, the Vermont State Police employs about 290 sworn troopers and about 90 civilians, who operate out of headquarters in Waterbury and 10 field stations from just south of the Canadian border to just north of the Massachusetts state line. VSP has an authorized strength of 333 troopers and currently is hiring.

“It is my honor to say thank you, to each and every member of the state police, sworn and civilian, for your service to Vermont,” wrote Gov. Philip B. Scott in a letter to VSP’s membership. “You come to work every day, never knowing what you might face, but always prioritizing the safety and wellbeing of others. I appreciate your willingness to place service above self with a commitment to your core values of courage, honor and integrity.”

The Vermont State Police is marking the momentous occasion by unveiling commemorative license plates for each cruiser and badges for state troopers. These items will be displayed throughout the 75th anniversary year during 2022-23.

In his letter, Col. Birmingham wrote that VSP’s anniversary celebration arrives at the end of the “unprecedented and transformative past several years, when a global pandemic changed everything, and the country engaged in a difficult but much-needed conversation about what policing should be. I assure you, the Vermont State Police will be better and stronger for it.”

He added: “One thing has remained constant over these 75 years: Your work ethic is second to none, and you conduct yourselves with dignity, honor, and a sense of service.” 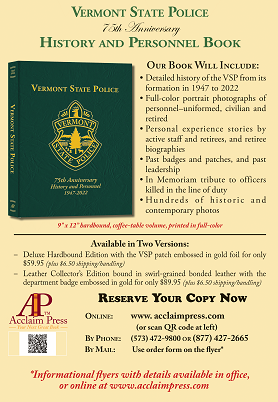 Anniversary yearbooks are available for pre-order now! Click here or the image at right to reserve yours today.

This page was updated most recently on Wednesday, June 29, 2022