Sergeant Michael W. Johnson was born in1963 in New Jersey. From New Jersey, the Johnsons moved to Ascutney, Vermont. From Ascutney the Johnsons moved to Claremont, New Hampshire where he lived until his sophomore year of high school. As a high school sophomore, Sergeant Johnson and his family moved to Bradford, Vermont. At a young age, it was evident that Sergeant Johnson was driven. He quickly found his niche in athletics, where he strived to be the best.

Sergeant Johnson went on to be a standout player during his one year as a member of the Oxbow Olympians. Sergeant Johnson played on both the basketball and baseball teams during his sophomore year of high school averaging 24 points per game on the basketball courts and being a pivotal member of the Oxbows State Champion Baseball Team that year. His drive and devotion to athletics was self-evident.

His junior and senior years were spent at BFA St. Albans where Sergeant Johnson was again a prominent athlete. Though he spent only two years at BFA, he surpassed the prestigious 1000-point mark in basketball.

As the oldest brother of the four Johnson boys, Sergeant Johnson acted as a role model for his younger brothers and helped foster their athletic prowess and would watch them become great athletes themselves.

Sergeant Johnson’s athletic career did not end with his high school graduation, but continued into his undergraduate studies of criminal justice at the Norwich University as a member of the Corps of Cadets and at the University of Scranton, in Pennsylvania. 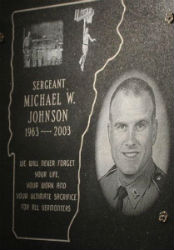 Sergeant Johnson’s six years at the Bradford Station saw him evolve from a new Sergeant to a seasoned 15-year veteran of the Vermont State Police. All Troopers dream of being a patrol commander and being able to run their shift as they see fit. Sergeant Johnson was able to use his motivational skills to enhance the abilities of the Troopers that served with him. Sergeant Johnson’s endless up-beat demeanor was infectious. He possessed the ability to raise people’s expectations of themselves and taught them to fulfill those expectations.

Sergeant Johnson was a driven and natural leader. He did not lead by dictating rhetoric; he led by doing. He led by example. He would never ask his Troopers to do anything that he would not do himself or that he had not already done. He was not afraid of a little work, nor was he afraid to get his hands dirty.

His role in the community was not simply just as a Sergeant in the State Police, but it was also as a father, husband, volunteer, coach, citizen, parishioner and a DJ, of all things. Sergeant Johnson loved his music. Two years ago, Sergeant Johnson started DJing local school dances and weddings. Sergeant Johnson also volunteered as the Bradford Elementary School, Girls basketball coach, last winter and was sometimes the lone chaperon for the elementary school ski lessons at the Dartmouth Ski Way. If Sergeant Johnson did not know you, he probably knew your children. 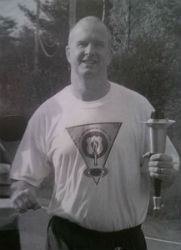 Sergeant Johnson had been a guest speaker at numerous events, speaking about a variety of topics. Sergeant Johnson has taught classes as part of the Bradford Station’s Citizen Academy. He has also done presentations at Oxbow High School and the River Bend Career Center in Bradford. His presentations were focused on alcohol and drugs, and how they affect your ability to operate a motor vehicle. He has also done presentations at the Bradford Elementary School on stranger danger, fire safety and bicycle safety. He would always use his unique style of public speaking to make each of his presentations fun.

The goal of these classes was to help bridge the gap between the State Police and the community, along with teaching the community the consequences of these type of actions, stressing the importance of making good decisions and promoting abstinence from alcohol.

Sergeant Johnson was also selected from amongst his peers to represent the Vermont State Police at the 2003 Vermont Youth Summit. Sergeant Johnson was a panel member in an open forum with Vermont teens discussing the dangers and consequences of drinking and or using drugs while driving.

As a result of Sergeant Johnson’s hard work and motivation during a statewide seatbelt initiative, he was awarded a Commander's Citation by the Commander of the Vermont State Police Field Force Division for his role in coordinating these events. Additionally, he was recognized at the state level for his individual efforts at apprehending drunk drivers.

Due to his active role in the community, his role outside of law enforcement has helped to present the Vermont State Police in a new light to the area youth, and his interaction with the students provides a strong role model for area teens.

Sergeant Johnson has embraced the Community Policing model of policing, in which a police officer resides in a geographical area of responsibility, and becomes personally involved in that community. In each of the areas he has worked, Sergeant Johnson has become involved in every aspect of living in that area, and organizing many community relations events designed to develop a bond between the citizens of the community, and the Vermont State Police.

The tragic and horrific death of Sergeant Johnson has left a huge void in the hearts and minds of not only the Troopers that served with him, but also in the hearts of wife and his children that loved him.