The Vermont Drug Task Force was formed in 1987 after VSP was selected to administer a drug control and systems improvement grant from the federal government. This grant funded the first multi-jurisdictional drug task force in Vermont. The Vermont State Police transferred Special Investigations Unit drug investigators into the new task force, where they were joined by a number full-time undercover drug investigators supplied by local departments.

The Vermont Drug Task Force's undercover investigators are made up of state troopers along with local, county and federal law-enforcement officers whose primary mission is to investigate people trafficking illegal drugs. This task force provides specialized resources that cover all corners of Vermont while enforcing state and federal drug laws and conducing long-term drug investigations. The task force also works alongside the Vermont State Police's Major Crime Unit, assisting with investigations into homicides and other major incidents.

Vermont law enforcement recognizes the importance of working with all agencies as a team to conduct large-scale operations to combat drug trafficking in the state. The efforts of the Vermont Drug Task Force have made an impact on communities across the state of Vermont.

Vermont has seen a tremendous increase in heroin and opiate use during the past several years. In 2015, the Vermont State Police was awarded a federal grant to add five additional investigators to the Vermont Drug Task Force to help combat the opiate crisis. These positions are vital to our efforts to stem the supply of heroin and fentanyl coming into Vermont.

The Vermont Drug Task Force has contributed to the arrest and indictment of multiple suspects and has seized an abundant amount of drugs. Investigators have worked countless hours and have been extremely dedicated to the mission.

For questions about the northern NIU, please contact Lt. Casey Daniell using the information below. 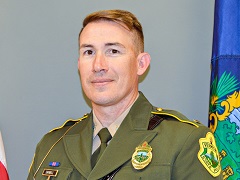 The southern NIU is commanded by Lt. Casey Daniell. He can be reached through the State Police Headquarters.