One of the three divisions of the Vermont State Police, the Criminal Division is highly respected for its investigative abilities and specialized units.  The Criminal Division strives to efficiently and effectively investigate all major criminal offenses that come to our attention.  The Criminal Division works closely with the Field Force Division, Homeland Security, state and federal prosecutors, the office of the Chief Medical Examiner, other law enforcement agencies and fire departments in order to bring resolution to each case that is investigated.

The Criminal Division, commanded by Major Dan Trudeau, is made up of the Major Crime Unit and the Bureau of Criminal Investigations (BCI).  Detectives with specialized training, technical skills and expertise work collaboratively on the most serious crimes and complex investigations. 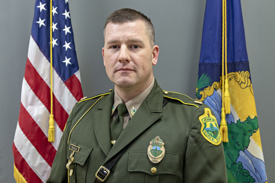 The Criminal Division is commanded by Major Daniel Trudeau.

Major Trudeau can be reached through VSP Headquarters: