Operation C.A.R.E. is made up of state police and highway patrol agencies that have joined together with the goal of reducing human suffering on our highways, particularly during national holidays.

In 1978, Vermont and all 48 states in the continental U.S. became part of Operation C.A.R.E. This makes it one of the longest running traffic safety initiatives in our nation's history. Operation C.A.R.E. was formed to deter the three key causes of highway fatalities: speeding, impaired driving and failure to use occupant restraints.

The vision that initiated the Operation C.A.R.E. program was born in the minds of two men who dedicated their careers to the preservation of life through highway safety measures. Sgt. Gary Ernst of the Michigan State Police and Sgt. Gene Neff of the Indiana State Police were first-line field supervisors who got together in 1977 to discuss their mutual concerns. Their plan for interstate cooperation would lead to the program we have today.

Today all 50 states, American Samoa, Guam, Puerto Rico, the U.S. Virgin Islands, and the provinces of Ontario and Quebec are involved in C.A.R.E. 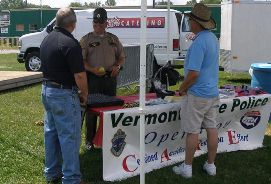 Following the early success of Operation C.A.R.E. during the three traditional summer holiday weekends, it now includes the All America Buckle Up Week in May, International Transportation Safety Week in June, the Thanksgiving holiday weekend, the International Association of Chiefs of Police/National Holiday Lifesaver Weekend, and other times. The Vermont State Police participate in each of these initiatives.

Operation C.A.R.E. is managed by the International Association of Chiefs of Police, and participating organizations are placed into four regions. Vermont is in the North Atlantic Region along with all New England states and others in the Eastern U.S., as well as Quebec.