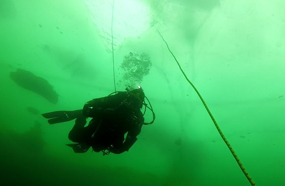 The mission of the Vermont State Police SCUBA team is an underwater recovery team. The team operates 24/7, 365 days a year and is capable of performing a number of technical underwater operations. The members of this team often include multiple levels of rank from trooper to lieutenant, assigned to various barracks or special assignments throughout the state.

The team utilizes advanced public safety dive technology including down imaging side scan sonar, and sector scan sonar. The SCUBA Team has an equipment/command post vehicle, SCUBA compressor and cascade system, a remote operated vehicle (ROV), and underwater towable cameras. The VSP SCUBA Team works closely with the Marine/Snowmobile Division and has access to 20 boats of various sizes for team activations. 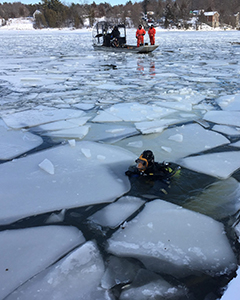 The VSP SCUBA team regularly is activated throughout the state to search for and recover victims of water-related incidents and evidence associated with criminal activity in lakes, rivers, ponds and quarries. Although most assignments occur within Vermont, members also have traveled to Maine, New Hampshire, New York and the Province of Quebec. 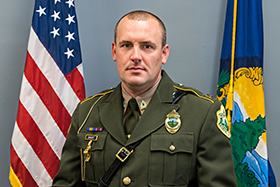